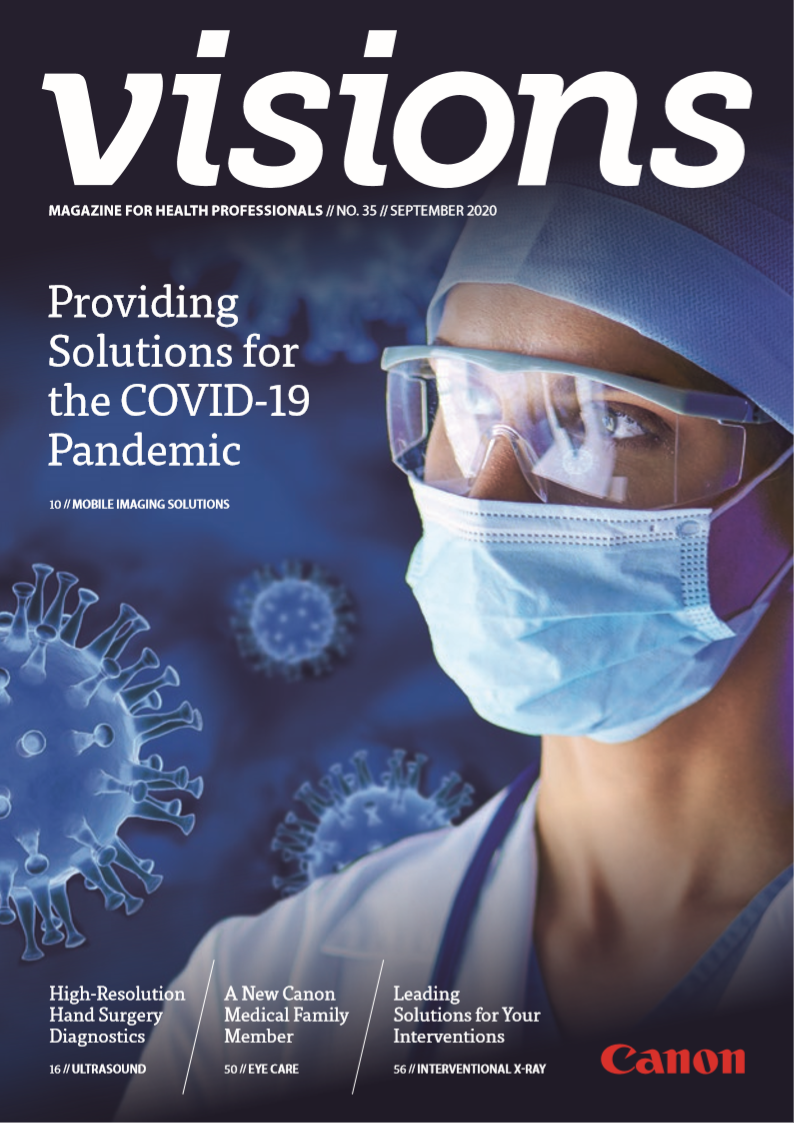 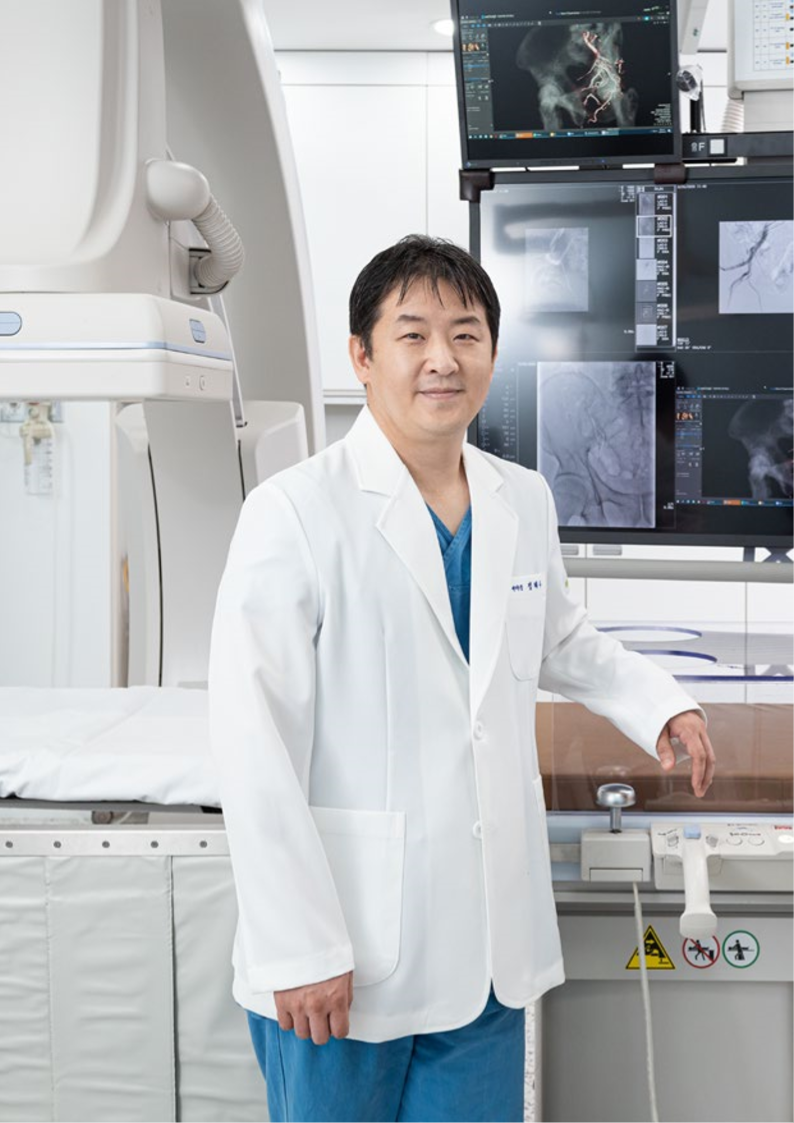 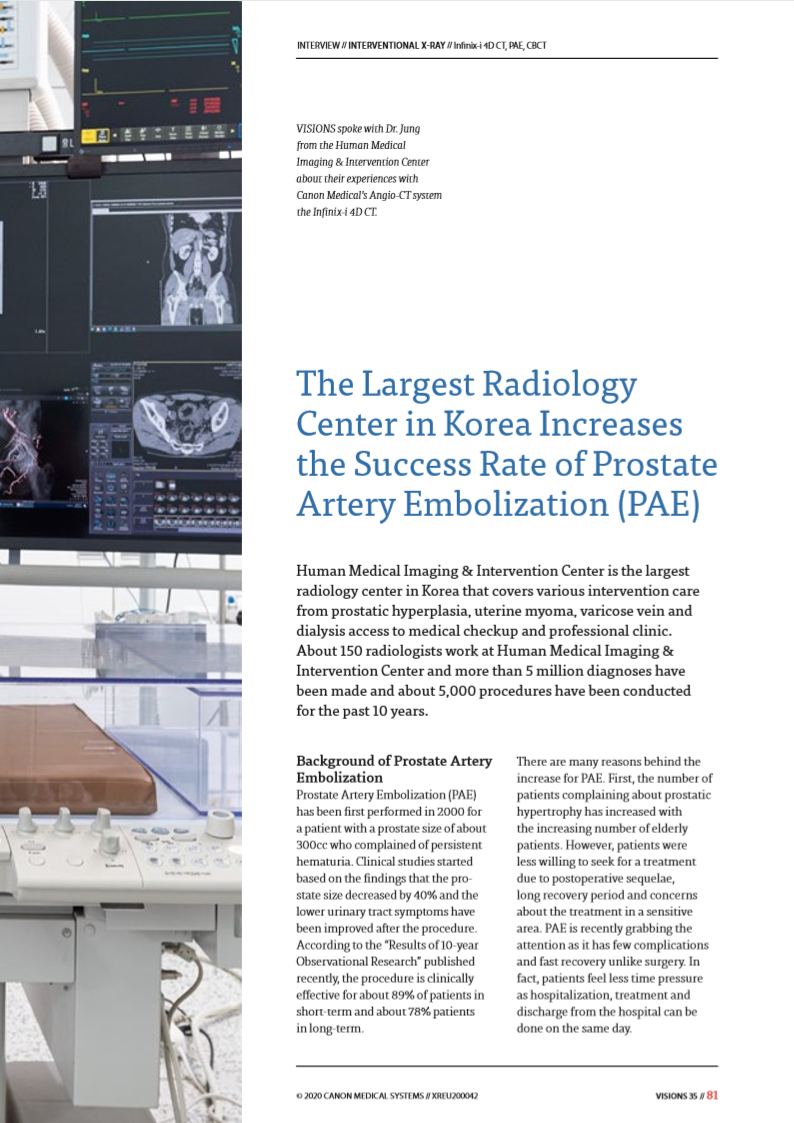 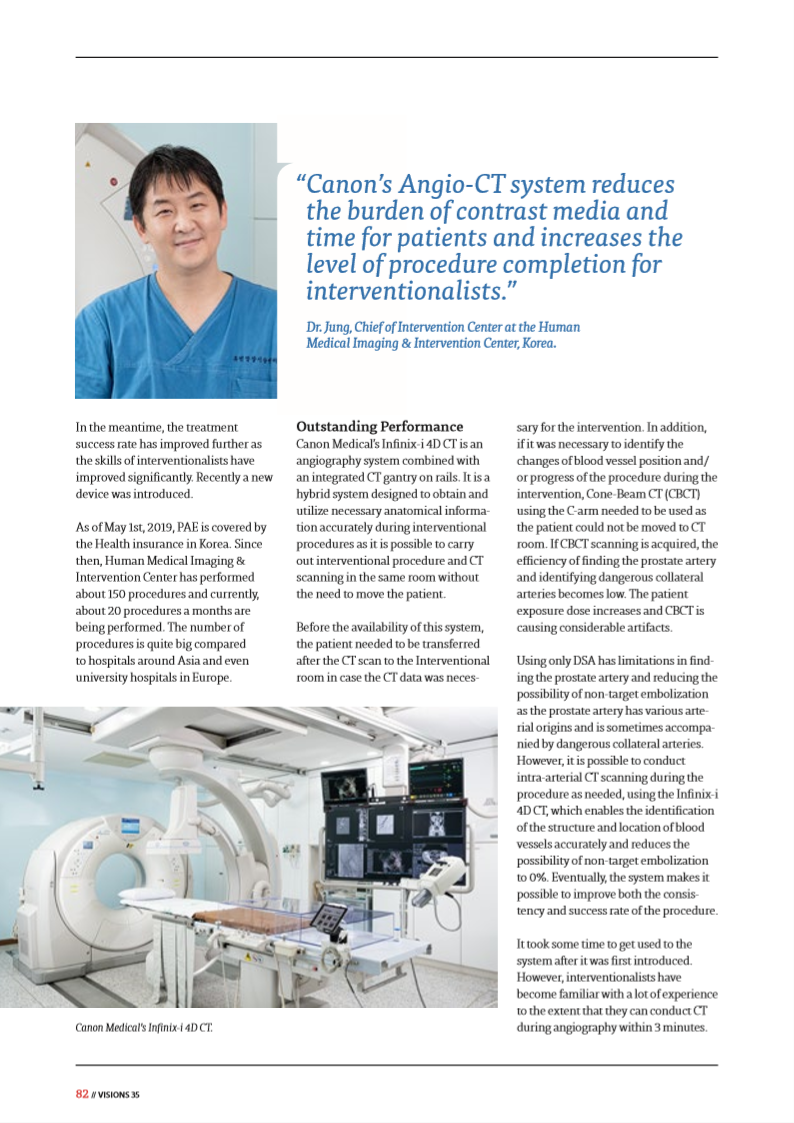 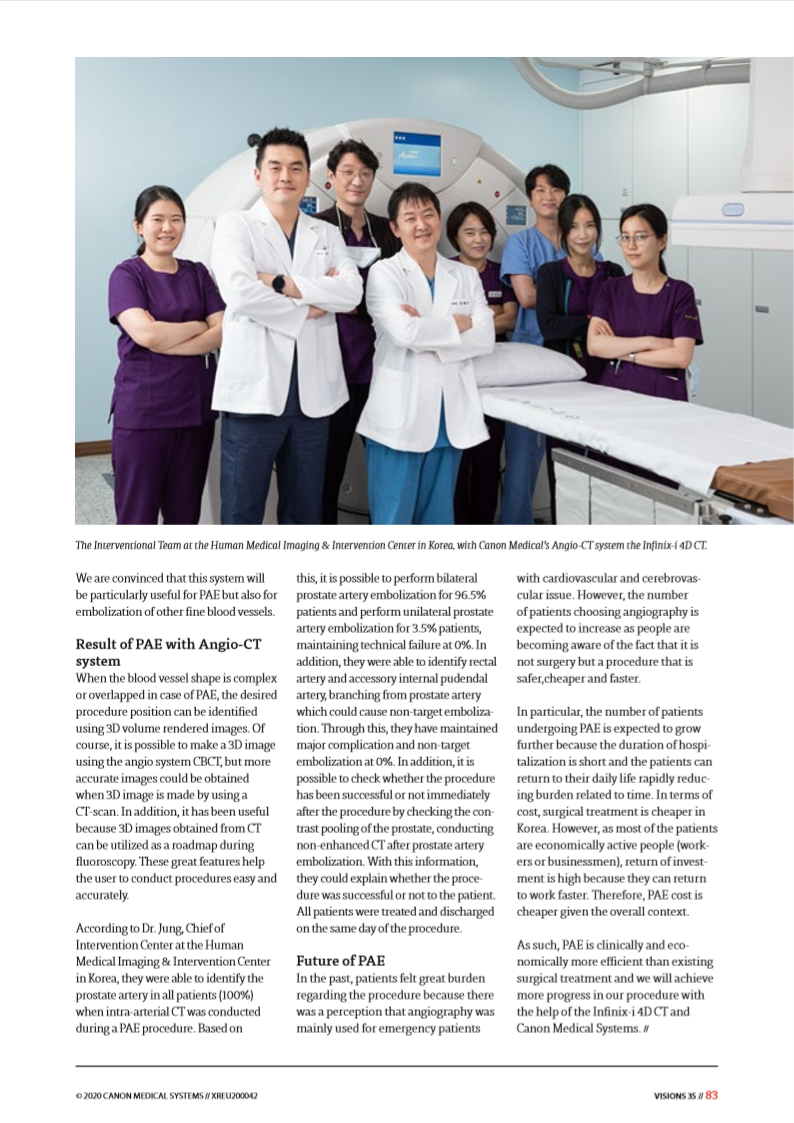 About 150 radiologists work at Human Medical Imaging & Intervention Center and more than 5 million diagnoses have been made and about 5,000 procedures have been conducted for the past 10 years.

Prostate Artery Embolization (PAE) has been first performed in 2000 for a patient with a prostate size of about 300cc who complained of persistent hematuria. Clinical studies started based on the findings that the prostate size decreased by 40% and the lower urinary tract symptoms have been improved after the procedure. According to the “Results of 10-year Observational Research” published recently, the procedure is clinically effective for about 89% of patients in short-term and about 78% patients in long-term.

There are many reasons behind the increase for PAE. First, the number of patients complaining about prostatic hypertrophy has increased with the increasing number of elderly patients. However, patients were less willing to seek for a treatment due to postoperative sequelae, long recovery period and concerns about the treatment in a sensitive area. PAE is recently grabbing the

attention as it has few complications and fast recovery unlike surgery. In fact, patients feel less time pressure as hospitalization, treatment and discharge from the hospital can be done on the same day.

“Canon’s Angio-CT system reduces the burden of contrast media and time for patients and increases the level of procedure completion for interventionalists.”

In the meantime, the treatment success rate has improved further as the skills of interventionalists have improved significantly. Recently a new device was introduced.

As of May 1st, 2019, PAE is covered by the Health insurance in Korea. Since then, Human Medical Imaging & Intervention Center has performed about 150 procedures and currently, about 20 procedures a months are being performed. The number of procedures is quite big compared to hospitals around Asia and even university hospitals in Europe.

Canon Medical’s Infinix-i 4D CT is an angiography system combined with an integrated CT gantry on rails. It is a hybrid system designed to obtain and utilize necessary anatomical information accurately during interventional procedures as it is possible to carry out interventional procedure and CT scanning in the same room without the need to move the patient.

Before the availability of this system, the patient needed to be transferred after the CT scan to the Interventional room in case the CT data was necessary for the intervention. In addition, if it was necessary to identify the changes of blood vessel position and/

or progress of the procedure during the intervention, Cone-Beam CT (CBCT) using the C-arm needed to be used as the patient could not be moved to CT room. If CBCT scanning is acquired, the efficiency of finding the prostate artery and identifying dangerous collateral arteries becomes low. The patient exposure dose increases and CBCT is causing considerable artifacts.

However, it is possible to conduct intra-arterial CT scanning during the procedure as needed, using the Infinix-i 4D CT, which enables the identification of the structure and location of blood vessels accurately and reduces the possibility of non-target embolization to 0%. Eventually, the system makes it possible to improve both the consis- tency and success rate of the procedure.

It took some time to get used to the system after it was first introduced. However, interventionalists have become familiar with a lot of experience to the extent that they can conduct CT during angiography within 3 minutes. We are convinced that this system will be particularly useful for PAE but also for embolization of other fine blood vessels.

Result of PAE with Angio-CT system

When the blood vessel shape is complex or overlapped in case of PAE, the desired procedure position can be identified using 3D volume rendered images. Of course, it is possible to make a 3D image using the angio system CBCT, but more accurate images could be obtained when 3D image is made by using a CT-scan. In addition, it has been useful because 3D images obtained from CT can be utilized as a roadmap during fluoroscopy. These great features help the user to conduct procedures easy and accurately.

In the past, patients felt great burden regarding the procedure because there was a perception that angiography was mainly used for emergency patients with cardiovascular and cerebrovas- cular issue. However, the number of patients choosing angiography is expected to increase as people are becoming aware of the fact that it is not surgery but a procedure that is safer,cheaper and faster.

In particular, the number of patients undergoing PAE is expected to grow further because the duration of hospitalization is short and the patients can return to their daily life rapidly reducing burden related to time. In terms of cost, surgical treatment is cheaper in Korea. However, as most of the patients are economically active people (workers or businessmen), return of investment is high because they can return to work faster. Therefore, PAE cost is cheaper given the overall context.

As such, PAE is clinically and economically more efficient than existing surgical treatment and we will achieve more progress in our procedure with the help of the Infinix-i 4D CT and Canon Medical Systems. //